Here is a brie 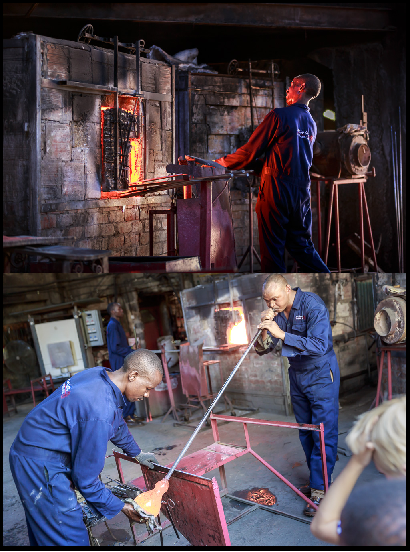 f reflection from two of our stars in the Jackals Village, after a recent trip to Kitengela Glass:

“We learned that at Kitengela Glass they recycle the glass. They melt it in a big heating oven and it was over 100 degrees Celsius! They melt the glass till it becomes like a red and orange gooey lava. Then they put it into little red colored glass particles that stick into the gooey lava. They keep putting it back into the big heating oven and picking up more melted glass till it gets bigger and bigger. Then they take it out and blow into the metal pole that was connected to the unfinished bowl.  Then they put it back into the heating oven and take it out with even more melted glass and blow into it again making it expand more on the inside. After that they spin it around and around. Then they put it back in to the oven and take it out and then they push a hole into it and take a peace of newspaper and roll the bowl on it until it becomes smooth. Then they do the same thing over and over again till the bowl is as big and fat as a jar. Last, but not least, they take the bowl and they test it by putting a newspaper on top of the bowl and suddenly it sets the newspaper on fire! They take out the bowl from the metal pole and put it in the cooling oven, which is actually still pretty hot.

Now at school we are going to use what we learned at Kitengela to create glass wind chimes and other things out of glass.”

THANK YOU: The beautiful photos are courtesy of Kirill Voloshin – thank you for joining us!